Cimi’s annual report shows continued high level of violence against indigenous peoples in Brazil, even in a year marked by the Covid-19 pandemic 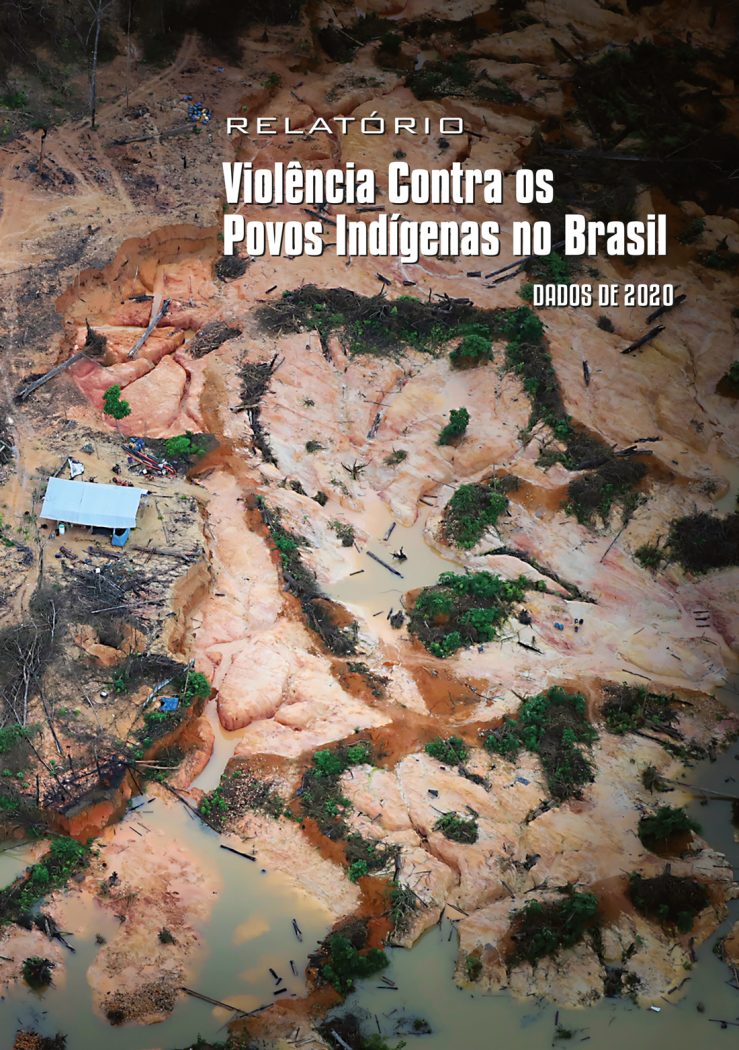 The Report Violence Against Indigenous Peoples in Brazil – 2020, published annually by the Indigenous Missionary Council (Cimi), presents a picture of a tragic year for the indigenous peoples of the country. The serious health crisis caused by the coronavirus pandemic, contrary to what might be expected, did not prevent land stealers (grileiros), miners, loggers and other invaders from further intensifying their attacks on indigenous lands.

The second year of Jair Bolsonaro’s government represented, for the indigenous peoples, the continuity and deepening of an extremely worrying scenario in relation to their rights, territories and lives, particularly affected by the Covid-19 pandemic – and by the omission of the federal government in establishing a coordinated plan to protect indigenous communities.

The year 2020 was marked by the high number of deaths that occurred as a result of poor management of the fight against the pandemic in Brazil, marked by misinformation and negligence by the federal government. This reality, regrettable for the Brazilian population in general, represented a real tragedy for the indigenous peoples.

In many cases, the virus that reached the villages and caused deaths was taken into indigenous territories by invaders who continued to act illegally in these areas during the pandemic, free from inspection and protection actions that are a constitutional attribution and should have been carried out by the Government.

The Report identified that, in 2020, cases of “possessory invasions, illegal exploitation of resources and damage to property” increased, compared to the already alarming number that had been registered in the first year of the Bolsonaro government. There were 263 cases of the type registered in 2020 – an increase compared to 2019, when 256 cases were counted, and an increase of 137% compared to 2018, when 111 cases had been identified. This was the fifth consecutive increase registered in cases of this type, which in 2020 reached at least 201 indigenous lands, of 145 peoples, in 19 states.

The invasions and cases of exploitation of natural resources and damage to property registered in 2020 repeat the pattern identified in the previous year. The invaders, in general, are loggers, miners, hunters and illegal fishermen, farmers and land stealers (grileiros), who invade indigenous lands to illegally appropriate wood, devastate entire rivers in search of gold and other minerals, in addition to deforesting and burning large areas for opening pastures for cattle. In many cases, invaders divide land into “lots” that are illegally traded, including on indigenous lands inhabited by indigenous peoples living in voluntary isolation.

These groups and individuals act with the certainty of the government’s – often explicit – connivance, whose performance in the environmental area was summarized by the famous phrase of the then Minister of Environment, Ricardo Salles: this is the opportunity to take advantage of the pandemic to push the deregulation of laws.

The case of the Yanomami, Ye’kwana and Munduruku indigenous peoples exemplifies the close relationship between the actions of the invaders, the omission of the State and the worsening of the health crisis. In the Yanomami Indigenous land, where the illegal presence of about 20.000 miners is estimated, invaders devastate the territory, provoke conflicts, practice acts of violence against indigenous people and also act as vectors of the coronavirus – in a territory where there is also the presence of indigenous people in voluntary isolation.

In many villages, the pandemic took the lives of elders who were true guardians of the culture, history and knowledge of their peoples, representing an inestimable cultural loss – not only for the indigenous peoples directly affected, but for all of humanity. According to data from the Articulation of the Indigenous People of Brazil (APIB), more than 43.000 indigenous people were contaminated by Covid-19 and at least 900 died from complications of the disease in 2020.

The violence against indigenous peoples and their territories is consistent with the discourse and practices of a government which project is the opening of indigenous lands to predatory exploitation, acting to make these areas available for private appropriation and favouring the interests of large companies in agribusiness, mining and other large economic groups.

This political choice of the federal government is evidenced by the numerous speeches given by the President of the Republic himself and by law proposals such as (PL) 191, presented by the government to the National Congress in February 2020, and Normative Instruction (IN) 09, published by the National Indian Foundation (Funai) in April.

While the law proposal PL 191/2020 aims the opening of indigenous lands to mining, gas and oil exploration and the construction of hydroelectric power plants, among other predatory activities, IN 09/2020 started to allow the certification of private properties on indigenous lands not yet ratified as indigenous lands – which includes indigenous lands at an advanced stage of the demarcation process and areas with restricted use due to the presence of isolated indigenous peoples.

These measures also had a direct influence on the increase in cases of “conflicts related to territorial rights”, which more than doubled in relation to the previous year. There were 96 such cases in 2020, 174% more than the 35 identified in 2019.

Also noteworthy is the considerable increase in the murders of indigenous people in Brazil. In 2020, 182 indigenous people were murdered – a number 61% higher than that recorded in 2019, when 113 murders were counted.

A synthesis of this bleak scenario can be indicated by the fact that, although not all types of violence have increased compared to 2019, the overall calculation of the categories “violence against the person” and “violence against indigenous heritage” in 2020, was the biggest of the last five years. In the same period, the cases of “violence due to omission of the Government” were smaller than those in 2019, the first year of Bolsonaro’s government.

The suspension of demarcations of indigenous lands, announced by the President of the Republic during his electoral campaign, continues to be a guideline of his government 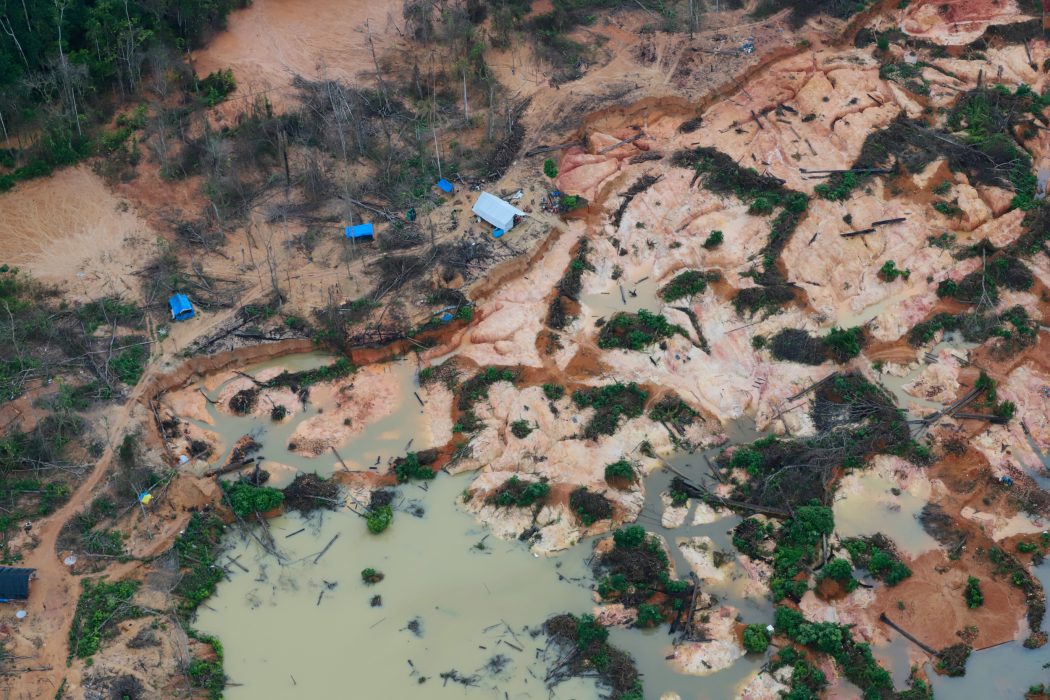 In the Yanomami Indigenous land, where the illegal presence of about 20.000 miners is estimated, invaders devastate the territory, provoke conflicts, practice acts of violence against indigenous people and also act as vectors of the coronavirus. Photo: Chico Batata/Greenpeace Brasil

Regarding the three types of “Violence against Heritage”, which form the first chapter of the Report, the following data were recorded: omission and delays in land regularization (832 cases); conflicts over territorial rights (96 cases); and possessive invasions, illegal exploitation of natural resources and various damages to the heritage (263 registered cases). The records thus add up to a total of 1.191 cases of violence against the heritage of indigenous peoples in 2020.

The suspension of demarcations of indigenous lands, announced by the President of the Republic during his electoral campaign, continues to be a guideline of his government. Of the 1.299 indigenous lands in Brazil, 832 (64%) are still pending their regularization. Of these, 536 are areas claimed by indigenous peoples, but without any action by the State to start the administrative process of identification and delimitation.

Many of the cases of abuse of power, various threats and racism and ethnic and cultural discrimination occurred when indigenous people were looking for care or assistance in the midst of the corona pandemic 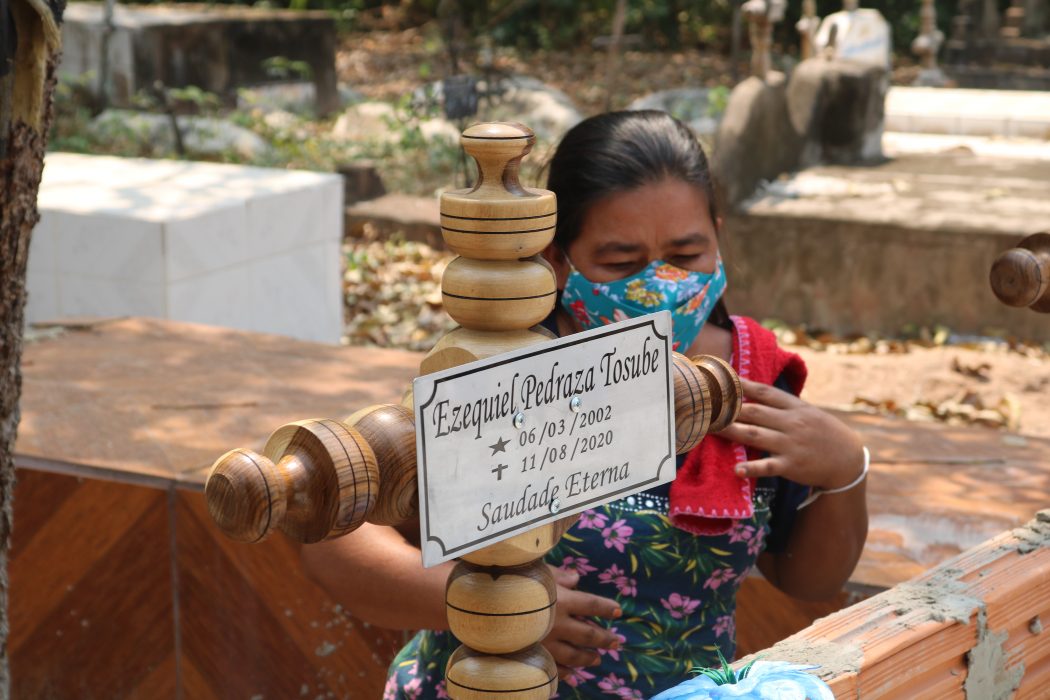 Violence against a person

The Brazilian states with the highest number of indigenous murders in 2020, according to data obtained from the Special Secretariat for Indigenous Health (Sesai) and the state health secretariats, were Roraima (66), Amazonas (41) and Mato Grosso do Sul (34). Unfortunately, the data provided by Sesai and the states do not present detailed information about the victims or the circumstances of these murders, which makes further analysis impossible.

It is noteworthy that many of the cases of abuse of power, various threats and racism and ethnic and cultural discrimination occurred when indigenous people were looking for care or assistance in the midst of the corona pandemic. In addition to the deaths and hunger, which affected many communities in situations of extreme vulnerability, prejudice and racism were aggravating the suffering experienced by indigenous peoples during the health crisis.

Violence by Omission of Public Authorities

Although they did not register an increase in relation to 2019, the cases of “violence due to omission of the public power” in 2020 remained, together with the previous year, at a high level compared to that registered in the years immediately prior to the beginning of the Bolsonaro government.

Based on the Law on Access to Information (LAI), Cimi also obtained partial data on suicide and mortality in indigenous children from Sesai. In 2020, 110 suicides by indigenous people were recorded across the country. The states of Amazonas (42) and Mato Grosso do Sul (28) remained as the ones that registered the highest number of occurrences. There was no increase in cases compared to 2019, when data from Sesai indicated the occurrence of 133 suicides.

Also, according to data from Sesai, 776 deaths of children aged 0 to 5 years were registered in 2020. Also in this case, the states with the highest number of records were the same as in the previous year: Amazonas (250 cases), Roraima (162) and Mato Grosso (87). Although, as in the case of suicides, there was no increase in the number of cases compared to 2019, the Secretariat emphasizes that the data are preliminary and subject to change.

Also in this chapter, most of the cases reported are directly related to the context of the pandemic and the lack of public assistance, especially in the area of health. The lack of support for the installation of sanitary barriers in indigenous lands, the interruption or omission in the supply of food baskets and hygiene materials, necessary to guarantee basic conditions of protection and prevention against Covid-19, were some of the recurring cases recorded in this chapter.

Articles and facts about the pandemic